Disclaimer: This may contain factual errors, but that's the point. These are my memories of Scott.

Scott joined our family when I was six. I had met him as "Scott" and the name stuck. I wasn't about about to start calling him "dad", there was already someone with that title. Scott would always be Scott or "my step dad", and my bio-dad would always "dad". But it was Scott, along with my mom, who raised me. He would get me up for school when my mom had to leave early and sew our Halloween costumes. He's the one who taught me to squeegee my arms and legs before drying with a towel. Scott taught me how to tie knots, climb mountains, jump off sand dunes, build houses, and change the oil in my car.

His fall after I graduated college wasn't the first fall that changed him. When he was in high school he had a painting business and fell and badly hurt his back. In the 1970s while leading a particularly difficult section of a climb he fell and cracked his head. His buddy John got him down and performed first aid. After regaining conciousness Scott ran so quickly that John couldn't keep up.

Before the climbing accident Scott was a singularly intense person, but the Scott that I knew was primarily goofy. He was one to frequently whistle and make sure that we knew what it meant to warble. He light heartedly made fun of my music, especially when The Crystal Method's "Busy Child" was popular. Scott often responded to situations where he learned something new with "I guess I didn't know".

He still had his intense moments, he was a perfectionist and extremely hard on himself. These qualities also made him, at times, extremely unfun to work for while we were building our house. When the stakes were less personal working for him was less of a chore and sometimes fun. I owe so much of my handiness to him. I learned so much working for him in the summers.

Scott was part of a community of builders who supported each other with their shared labor. It wasn't unusual for there to be a work party where Scott would go to a friend's and spend all day framing in exchange for lunch and a beer at the end of they day. We had work parties too. When Scott designed our house, he had planned it as a sort of remodel of our post and beam cabin. Scott had devised a plan to move the cabin forty feet, and turn it ninety degrees before setting it down on our new house's foundation. Several of his friends came over and we used logs, jacks, and come-alongs get the job done, and enjoyed lunch and lemonade.

More than once Scott would interrupt his life in Washington to do a project for his friends and family. His ex-parent-in-laws had a building they were refurbishing in LA, he moved temporarily to do it for them. His friend wanted to build a new house in Alaska, of course Scott relocated for part of a year to do it. When his brother moved to Idaho, Scott went to build his (enormous) house. While the house was being drywalled and painted Scott drove back home to Washington towing a fifth wheel full of alfalfa for our elderly horse, Big Red. He had ordered all of the doors for my uncle's house from a company in Seattle and planned to load them up on the trailer and drive back to Idaho with them. I went too and spent a few weeks there wiring outlets and lights, prepping windows and doors for trim, moving the sprinklers in the fields, cutting and bailing hay, and exploring on a four wheeler. I never ate more diner food in my life.

Before I flew back home we planned to climb the North Face of the Grand Teton. Scott had done it once in his youth (up and down in a single day!) and had fond memories. We packed light, drove to Wyoming and stocked up on food. The first day we hiked up to just below the Teton Glacier and camped. We didn't bring a tent, so we slept under the stars in our sleeping bags. The next morning we headed up the glacier. It had been a dry year so there wasn't much snow on top of the ice and we hadn't brought crampons. Part way up I slipped and started sliding down the ice. Fortunately, I was able to turn myself over and self-arrest with my ice axe. In the process, I scraped up my knuckles and elbows, but we were able to continue on. Afterwards, Scott said he'd been eyeing a crevasse and was prepared to jump in it if that's what was necessary to save me. We eventually got to near the base of the rock wall, but the ice had pulled away too far for us to safely get to it. As a result we never actually made it up the North Face.

Scott was always ready to go out of his way to rescue. When I was still in high school, my friend and I drove to The Gorge to see Radiohead. Pretty early in trip my car started making the telltale "worh worh worh" noise indicating that wheel bearings were going out. Of course, being teenagers we pushed on. The morning after the concert just as we were nearing the freeway, I pressed my foot to the break pedal. Instead of slowing the car down, my foot went all they way to the floor. Pumping the pedal a few times did the trick and we made it to a gas station. I called home on a payphone and Scott said that he was on his way. He rented a car trailer and drove five hours each way to pick us up without even a complaint.

Another time, while in college, I ran out of fuel in Lorna's diesel Rabbit. The fix for this is to unhook the fuel lines and bleed the air out of them. Unfortunately, the Rabbit didn't actually have a separate fuel pump, instead diesel would be pumped in when the engine turned over. After draining the battery trying to get enough fuel through the lines and finding out that no, Intercity Transit does not allow you to bring lead-acid batteries aboard buses, Scott drove down to Olympia to help me. We tried using his truck to generate power for the Rabbit's starter, but turning over the engine that way just wasn't enough. Eventually, we decided the solution was for Scott to tow me around the dorm parking lot while the fuels lines were disconnected. This worked and we were able to get it started!

Scott's fall after college wasn't even his first fall after I knew him. One year on the day after Thanksgiving, Scott fell while at work. My mom went to the hospital, but we stayed home, we had family visiting. I don't remember a lot about this particular injury, the only thing I remember is being angry that my adult family member was acting as the middle person, not letting me talk to my mom myself to see what was happening and how Scott was doing. Scott wasn't away in the hospital for too long and eventually was able to recover from home.

Less than a month after I graduated college, Scott fell off of scaffolding while working on a remodel. He lost conciousness and was airlifted to Harbor View Medical Center. While he was in a coma there, and for the months he stayed there getting physical, occupational, and speech therapy I realized how much of an impact he had on other people. Especially on other men. He was so well respected and loved by everyone who knew him. The lumber yard even made him a (painted) golden hammer.

Scott was always in physical pain, how could he not be with a body as worn as his, but he was always able to push through his pain. He was the toughest person I knew. But after his fall, that changed. Now the pain was too intense for him to push through. While we were still in the hospital he was nearly able to walk using parallel bars. After he got home, he slowly lost more and more mobility. He couldn't get through his physical therapy lessons. He could barely get in and out of his chair by himself, then eventually he could not without help. It became impossible for my mom to take care of him and also take care of herself.

Scott has lived in a care facility for the last decade plus. I can't remember the last time he was able to get out of his bed. Every time I called or visited him he was so happy to hear my voice. We would talk about what was happening in my life, I'd ask him for advice on some project I had, or he'd tell me about one if his amazing adventures in Alaska or sailing down the New England coast during horrible weather. Scott often told me that he was proud of me. Not all dads do that. He wasn't living the life he had expected to, but he was content.

When Scott got pneumonia around Christmas and was sent to the ER he was barely able to stay concious. Every day at the hospital he had different care providers who were unfamiliar with the level of physical pain that he was treated for every day. And now the pain was even worse. How do you treat someone for pain who was already on the highest levels of pain medication? Scott's old friend, Jim, who lived nearby visited and I was able to speak to Scott one last time. The conversation was mostly me and Jim reminiscing and Scott occasionally managing a one to three word response. Throughout the call the nurse increased his pain medication and at the end when I finally told him that I loved him he was unable to respond. But Jim told me that he could tell from Scott's face that he was saying "I love you too." He died four days later. 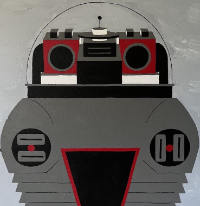 This site is part of the Robot Friends webring.